Why did you buy a water softener?

Chances are you’d either read about or experienced the negative effects of hard water. Scale buildup leaves residue on your water heater, appliances, and on your plumbing fixtures. Soaps and detergents become less effective. The high count of minerals in your drinking water caused multiple problems, and you addressed them by purchasing a water softener. If you went with a salt-based water softener that choice was likely influenced by the fact that salt-based systems remove the magnesium and calcium minerals through ion exchange. When you’re investing in a solution for irritation and problems caused by hard water this is understandable. However, traditional salt-based water softener companies have ignored one crucial problem altogether: the chlorine present in your water supply. Some homeowners incorrectly assume that water softeners remove chemicals like chlorine from the water they use to drink and bathe. However, salt-based water softeners have not answered the call for chlorine removal. Most salt-based softener brands will recommend that homeowners invest in a reverse osmosis filtration system on top of their softener because the technology they use cannot address chlorine. This only reduces chlorine from tap water at the kitchen sink and does not address the water you bathe and shower in. 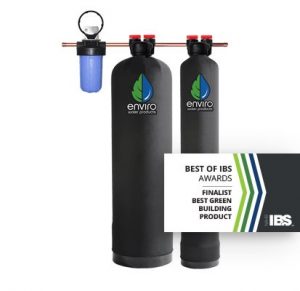 The new kid on the block

California declared chloride the biggest contaminate affecting water supplies, the nation, and the world. Because individual municipalities usually control water sources, some states, like California, choose not to enforce statewide bans. The California solution was the implementation of Assembly Bill 1366 in 2005, enabling local communities to ban these types of water softeners to meet environmental discharge standards. In January 2014, the governing board approved rules banning the new installation of water softeners that use sodium, or potassium and discharge the salt solution into sewer lines. As of August 2014, saltwater softeners have been banned in 25+ California communities.

However, a new type of water softener entered the scene! Salt-free water softeners negate the effects of magnesium and calcium by preventing the scale buildup they create, and also use no electricity and generate zero water waste. You no longer have to choose between filtering chlorine out of your water and taking care of your frustrating hard water problem. Products like Enviro’s water softener and filter combination systems take care of both problems while providing every tap in your home with refreshing, healthier and better-tasting water. You can now filter the harmful chlorine and contaminants from your water and eliminate the negative effects of hard water without using expensive salt that can damage the water supply. With Enviro Water Products you can have it all and never worry again about what’s lurking in your water.

What real harm can chlorine do?

Plenty. Chlorine is inexpensive, which has made it a primary choice for water disinfection for decades. But chlorine also has many inherent hazardous chemical qualities. After all, chlorine gas was used as an effective weapon during World War I, burning bodily tissue and organs upon inhalation. We should be concerned, then, that high levels of a known poison agent are present in the water we drink. According to Scientific American, the consumption of drinking water treated with chlorine has been linked to a higher risk of rectal, bladder, and breast cancer. When chlorine is in your water supply it can interact with natural organic compounds to form THMs (trihalomethanes) that assist the growth of free radicals in your body once ingested, causing countless cells in your body to be damaged or destroyed.

As disinfectant chlorine is designed to parasites like giardia and cryptosporidium if either is present in your water. But chlorine doesn’t discriminate – it can also decimate your intestinal tract by wiping out much of the “good” gut bacteria in your digestive system like lactobacilli. Poor digestion and related health problems can occur when drinking highly chlorinated water for great lengths of time. 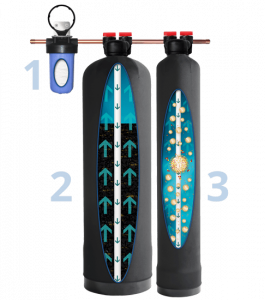 Why should I go with Enviro Saltless Products:

Unlike other systems on the market, EnviroSoft™ is the only salt-free water conditioner certified for 99.6% scale prevention with DVGW and requires only 3 seconds of contact with the water; Others require 9 seconds or more. EnviroSoft™ is unlike any other system on the market. EnviroSoft™ is made in the USA and is sold only by Enviro Water Products. Another benefit of going with Enviro is the lifespan of the EnviroSoft™ catalytic granules. EnviroSoft™ catalytic granules have been rigorously tested in the real world, used in the commercial industry, and made to be non-sacrificial, therefore it requires no “rest time”, and requires no replacement. Other similar technologies require replacement every 3-5 years at costs of $600-$1,000 and require you not use their systems for 8 hours a day for proper rest!

With Enviro’s Combo Series you get the best of both worlds! First, the Sediment Filter captures sand, rust, and silt that is commonly found in municipal water supplies. The sediment filter can be installed in the pre or post position. Next, the Carbon Tank intensely filters the water using a proprietary mixture of high-quality catalytic carbon media. Its function is to reduce chlorine and chloramine tastes & odors. Finally, the EnviroSoft™ Conditioner transforms scale-forming calcium and magnesium into harmless crystals that won’t stick to pipes, fixtures or appliances; providing 99.6% scale prevention without the use of chemicals or salt. Unlike traditional salt-based systems, the Enviro Ultimate Combo wastes no water and does not discharge harmful salt brine into the environment.

Why Are Chemical Drain Cleaners Harmful To Your Plumbing?Armstrong Plumbing Blog
Go to mobile version